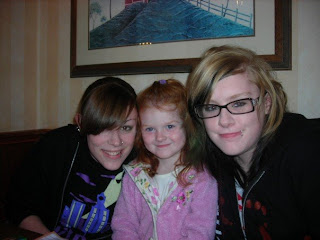 Have you ever noticed that folks with kids are easy to spot-- even when the kids are not in tow? You can hear them whistling the theme songs to Winne the Pooh and Scooby Doo on the elevator and in the break-room at work. Of course they'll deny it, and try to come up with a classic rock tune just to prove you wrong. Really? Middle aged men and woman humming the opening riff to Ozzy Osborn's Crazy Train, yeah right, I am not convinced. Non-parents will not have a clue about this - and label it and you "old," with no further ado.

Parents, they are usually not the best dressed in line at the grocery store either. I have studied this phenomenon on the Discovery Channel. The real clue is the amount of them that end up with Stacy and Clinton on What Not to Wear.

The evolution of the species parenta nurotica is very closely related to daddytodamntired. There are some other mutations within the species including joggasaurus which developed as a defense mechanism against slow metabolism and vantaxi which is evolved, now a lackoftime.

Kids are classified by stages-- but nothing like the labels on the diaper packaging. The newborn is better known as the "Projectile Vomit Gun." These precious little ones are as harmless as a Nerf Ball, but emitting an aroma that only the non-parents can smell. Oh, and far better then a "cries all night/sleeps all day" model. Amazingly if you have more than one child, you usually end up with at least one of each.

The crawler is better described as the human puppy dog, eating left-overs from the floor and finding everything you dropped while the wife, was in her last few weeks of pregnancy-- and said, "I don't really need that now, I'll get that later." Crawler-Baby says, "later is here."

Toddlers have the "terribles," some times at 2, and sometimes at 3. And in the case of a rare, but special few, both! Although as unsteady as a drunk driver, they carelessly navigate the living room-- I mean "central playroom" obstacle course. It is a home version of Wipeout. Ah yes, these are the ones that give definition to the word "cute." Have you seen them on AFV covered with diaper ointment, chocolate and other smearable substances? Covering everything from carpets to siblings-- and mom, you were just trying use the bathroom alone!

TIP: Never feed your toddler a 1/2 pound of grapes for both breakfast and dinner. It's just not wise.

Preschooler is not a very good term. And thank God they are out of bionic diapers! There is nothing "school" about bringing home two one-hundred foot trees worth of paper notices each day. The backpack is a disguise for a Xerox machine-- well except for the jelly sandwich from last Friday. And finger-painting was not learning when in was in school. Lastly, never ask a your 4-year-old who they are voting for, it is sure to upset at least one of the grandparents.

Kindergarten is like real school. There is homework, classwork, silver stars and Spanish. That's right, in my town, kids learn Spanish. I thought we just getting past having to watch Diego, the kid with the loudest inside voice on TV, anymore. The bright side, there are Spanish as a Second Language classes offered four nights a week. Bueno, just bueno.

Your child will find it ever so loving when you give them nicknames. Because the quiver is rather full in my house, I use the prefix "cheese" for all my kids (and pets) terms of endearment. We have a Cheese Whiz, a Cheese Girl, a Cheesecake, occasionally a Cheese Dip or Doodle, and Cheese Dog. I am confused as to why they don't use them on Facebook?

Elementary school brings the ever intimidating "first" school bus ride. As a proud parent you wait for your little prince, or princess to get on the bus and wave goodbye to you -- consoling your feelings of guilt for not home-schooling them until college graduation. But the truth is, they already heard about this day from Eddie Wilson, and have plotted against you to NOT look as they high -five their buddies while the bus driver pulls away-- all before your child has even taken a seat. It's just not fair, now is it? Wait until you find that Spiderman lunchbox you thought they would just love, underneath the bush next to the front door as you return in tears.

Let's just say that our expectations from here on in, well, they nothing that we talked about when we decided to get married. Some things have changed. First your definition of gross is not your boyfriend/girlfriend picking their nose when he/she thinks you are not looking. Nope, what kids do, eat, and emit, changes all that. Look under the car seat sometime. Romance is supposed to be the spontaneous eruption of love, only to be quenched by "Daddy, I can't slee-ee-eep, can I sle-eee-eep with you and mommy-- in the middle like before, OK?"

Depending on how many kids you have, you try to fall into a routine, keep your 10-year-old car running, and make it to karate and/or ballet on time. It's a good thing someone at church told you about date nights. You know, you get a babysitter at 6, and show up at home around 9, hoping she's done her job and got them to bed without any negotiations that include: "Wait until your parents get home."

Middle school is a bit of a blur, but it gets very focused when your daughter is found to be talking to boys. At my church, they told me that it was a joy to tell your kids about sex. They were obviously a cult.

I have friends from high school that complain about how much work it is to parent teenagers. I simply suggest that they become licensed for large capacity firearms as I have done. Every few weeks you bring home some targets with your best work, and leave it on the dining room table. Word gets out.

Honestly, the real trick is to be involved. In my case that meant music. At first we'd go to some Christian rock bands that I actually liked. Sanctus Real, OC Supertones, Audio A, Reliant K and stuff like that. It was OK and besides, I was the biggest kid in the Mosh pit. I do, however; have a bone to pick with Pillar. You guys are awesome, I'd simply like my hearing back. I think I left it at your last show in Worcester.

Then there's the dating, the driving, and the friends. To average IQ of all my kids friends combined is 11. And when they are in a group, it's 6. I just can't believe some of them passed potty training, let alone got licenses to operate and automobile.

Driving? Just two tips. They have schools, and stock up on Ford Escort taillight lenses, they are cheaper by the dozen. They are the most popular car in America, the odds are pretty good.

My girls were pretty cool about dating. They would tell me that the really liked so and so, and ride around with so and so's best friend. That is how they ended updating so and so's best friend-- if you follow me. One daughter really likes to have me meet them, the other is afraid I will tell him about that time she so readily embarrassed herself. I promised I wouldn't-- I lied. Forgive me Jesus. The middle one, she gets them squirming and sitting across from me at the food court in the mall. "Show 'em your license to carry daddy!" I slide it across the table and wait for the response.

"Mr. J. is it OK if hug your daughter good night?"

"Sure, if you want to die right here in the mall." I said smirking. Where the heck is Paul Blart when you need him?

You, know I am thinking how glad I am that I dragged them to church.

And finally college, a time when they freak out about not being able to see their friends in like forever. Of course if you are doing field study in Antarctica that might be a problem, but what about Facebook, MySpace, IM, texting, old fashioned e-mail and antiquated phone calls? But then their gone, and only bills come home. But Charlotte's only five, I think I have one more left in me.

I do find kids rather amusing. I've lived is a sea of estrogen for 21 years, and with a little one, that is not ending anytime soon. Oh, I like boys too, it just been many years since one lived under my roof.

A piece of wisdom from David Walter' of Kids in Combat. "Kids are dumb, sticky and loud, but they don't have a junior Holy Spirit.

One last thought. Experienced parents are less and less protective with each growing addition to the family. My thirty something and my 5-year-old are pretty much allowed to do the same things now.
Posted by David-FireAndGrace at 9:58 AM

You must be a great Dad.

I can recall dating a cute girl in High school and met her dad on our first date. He was a marine fighter pilot from the Navy Base in Pensacola. Needless to say, I was afraid to even hold her hand after he gave me a talk before we went out on our date.

I was the same way with my daughters too. Hey! We got to protect our girls form those over sexed boys don't we?

Great entry, very funny! More than once I had to stop to read portions to my wife.