Graduation - We May Never Pass this Way Again 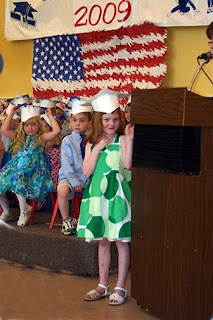 This year two of my girls graduated, one from High School and the other from Preschool. Sure, I am proud dad. My kids worked hard in many way to get to the podium. They are special, but average kids-- average like their dad. We are not the best, or most talented at anything. But to God, the three of us are extraordinary kids.

As I sat in the chairs here are some of the things that struck me. First, I am amazed at how many people can stand for the Pledge of Allegiance, and not hold their right hand over their heart. I guess now that we have tossed Bible reading and prayer out of school, now we can toss patriotism too. After all, that word "God" could offend someone.

At the Barnstable High ceremony I cried during the Star Spangle Banner as the competition winning band played. I also welled up for the pledge of Allegiance as it was said by two dozen 4 and 5-year-olds at Little Folk Farm. There is something about childlike faith that cuts through the bologna (thanks Oscar Meyer) adults somehow need to hear. But what really got to me was the flag. At first I noticed it was handmade by the kids. Then I saw it was made of hands-- cut-outs of all the students hands. Wow, that is powerful. 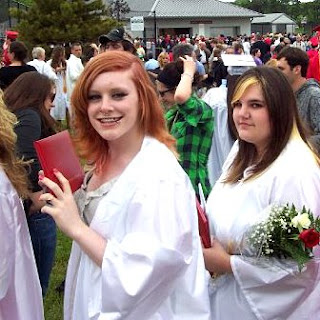 As I listened to speakers from students to school board members and administrators, I hear hope, hope for the future, hope for families, hope for education and jobs. The superintendent of schools read off the answers to questions like. If you really knew me, you would really know_____? After graduation I hope to be______. And, this is what I remember about high school _______. They were funny, ambitious, hopeful and even determined.

At the Pre-K ceremony, they made some predictions about the kids based on their likes and dislikes, as well as the personal aspirations of a 5-year-old.

At both commencements, I was caught up in the emotion of the moment. I thought about what I wanted to do when I graduated high school - travel party, and college. I am actually friends on Facebook with three kids that were in my Kindergarten class, one sat next to me in 1964. I don't remember if we had a commencement, but I don't think so. I was sad about all the time that has passed, and began to think about what I could have done, that I didn't. I was sad that my mother an father, both passed away, couldn't enjoy the smiles of my kids as they hugged teachers and friends.

Life is a vapor, no matter how hard I try to live each day to its fullest, time races on.

As my oldest graduate received her diploma, it was emotional. After all she is the child of divorce, and has had some bumps in the road. Her friend too, she lost her dad to an overdose just a few months ago. Quitting school would have been easier.

I used to be a photographer, and there in the bleachers were hundreds of kids I tried to get to smile so many years ago. A teacher that did the yearbook was honored, and I took a minute to congratulate him. It was also a chance to say thanks.

For each of the little ones, the teachers wrote a little bit about them. Charlotte, she is the Energizer Bunny. She likes to talk and talk and talk, like her dad. My wife was in tears! They talked about her friends, her art, her favorite sea animals (she calls them ami-alls). They talked about her smile, and her favorite thing to do: direct creative play times. She's a great kid. Next year she will be attending a Spanish immersion elementary school. Maybe she'll be a missionary, like her dad.

When I think about the energy that was put into my kids education -- the time spent with them, it's amazing. Even my now kindergarten aged daughter spent three years with the same folks. Those millions of drawings, capital letters, paintings, hand prints and uniquely crafted report card comments alluding to their strong wills, but never saying it. Wow!

I am so thankful for the care that these kids have been given. It is a wonderful milestone in life, a place to stop and reflect-- a place of hope. I thought about my senior prom theme, We May Never Pass this Way Again. Hmmm.....

I was also sad about what I didn't hear. No one mentioned love, or forgiveness, only hopes of making this a good life. Is that possible without God? There was no opening prayer, no benediction, only the Pledge of Allegiance. By the time my little one gets to high school, I doubt that the phrase "one nation under God," will be in it.

We may never pass this way again.
Posted by David-FireAndGrace at 2:04 PM

It is really thought provoking to be at both ends of the spectrum. One daughter graduating pre-school and one graduating high school.
One entering Kindergarten and one probably entering college, and entering the world, so to speak.
And so much that happens in between those years.
You are truly a blessed man David, as I am sure you know. Wonderful wife and daughters and even an extra blessing for now in JA.
No matter what nonsense 'the world' does, no one and nothing can take away from us those who the Lord has blessed us with. And the memories, all of them good and sometimes not so good.
It makes me think a little differently of the verse that says 'nothing can separate us from the love of God'. That love of God is often expressed in the gift of our loved ones. So nothing can separate us from anyone or anything that brings God's love into our lives. In the end it's all about love.

These are special momnents that are encapsulated into fond memories of an important time in your life. Cherrish them forever. I know I do.

Thanks to the ACLU actions we may not have Under God mentioned at all in the pledge very soon. I highlighted on my blog about the ACLU actions at a high school graduation in my home town. Way to go class of 2009.

While it's true the aetheist can take prayer and God out of our schools, He can't be removed from our hearts unless we concede.

I never talk/broadcast during the National Anthem while covering a ballgame on the radio, and before one particular basketball game, I couldn't focus on the anthem because of a kid in my sight-line talking on his cell phone. When the anthem was finished, I asked my partner to cover the starting line-ups while I took care of something, removed my headset and made a beeline for this kid. Apparently, his dad had seen him from across the gym and luckily beat me there. He took the kid's cell phone and put it in his pocket. My partner knew exactly where I was going because he had seen the kid too and gave the play-by-play on air of my march over and the aftermath.

We received a lot of positive feedback from the incident, and I still hear about it from some people 10 years later. I think a majority of people are upset by the removing of God from public display and a disrespectful demeanor toward our country...they just feel powerless to stop it. We shouldn't be afraid to speak our minds on either subjects and let others kow how we feel. Strength in numbers!

Your pictures from the graduations on Facebook were excellent. We live in estrogen laden families my friend...and I don't even have a male pet!