Can You Beleive It? - You May Have Been Railroaded! 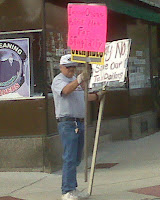 Living in the Bluest State has its disadvantages -- especially today. I couldn't be more embarrassed at what took place today in our state, and the nations capital. I don't care what side of the aisle you are on, today was the culmination of sheer hypocrisy, and it affects you and your family if you live in the US.

You may have heard Senator Ted Kennedy died just a few short weeks ago. It would have been hard to miss if you have a pulse. I am not sure which news outlets you listen too. The only reason that matters is that you may, or may not, have heard about a letter Ted wrote to the governor of Massachusetts. He asked Governor Duval Patrick to appoint a interim senator to "vote on important issues" in his heavenly absence. In some states, that is how it works, there is an appointment-- and it USED to be that way in Massachusetts. The governor appoints a new senator to take the place of the one who has left the post for any reason. The problem for Duval was that the Democrats changed the law while Republican Mitt Romney was in office. It was to insure that he would not appoint a Republican Senator in the event John Kerry was elected President.

Do you see the hypocrisy?

Today a new senator, and long time friend of Ted's was sworn in on the Senate floor after some legal wrangling and an emergency order in Boston. His name is Senator Kirk.

OK, so there is hypocrisy on both sides, and this is just another example. And for the most part that is true. If you'll give me one more paragraph, I will tell you why it matters to you.

First, this man was not elected, nor was it legal for this to take place. The MA legislature was lobbied by President Obama, Harry Reid and others in power in Washington. It's probably nothing new, but the pressure changed minds and inflated egos. I don't know about you, but I vote, and I didn't even get to vote against Kirk. Changing laws to suit political agendas I find disgusting no matter who does it. And lastly, unless you have your head in the sand, your government is going to decide the future of your health care. Why? Since about 3:30 this afternoon Congress, with a their impeccable 22% approval rating, now has a filibuster proof majority in the Senate. They do not need to compromise with anyone on the issue of health care -- or any other matter. Unless you completely agree with this 1,000 page bill that many have not even read (you included), you don't have a vote, or any representation. Think about it.
Posted by David-FireAndGrace at 5:49 PM

Somehow you sound surprised. Politics is 97% fiction and 3% imagination. I'm sure had the shoe been on the other foot...a red state would have done the same.

They're all crooked, self-serving weasels...period.

This does not surprise me David. It is what happened with the NAZIS in Germany and the MARXIST in Russia.

The surprising fact is most Americans are so filled with apathy that they show no remourse when this happens and then wonder where their rights went. It is high time we all stood up and said no more shenanigans in Washington with out a vote from the public.

If the Democrats or Republicans fail to listen to us ( their employers)then it is up to us to fire them while we still can.

I would think if elections for president and congress positions were today, there would be a mass exodus of liberal fanatics getting the boot out of Washington. Then again it might not be as long as ACORN and other pro Obama organizations have any way to rig the votes.

It was inevitable, I fully expected it to happen.
I just don't have the energy to follow all that is going on with politics. It is so discouraging.
A few weeks ago I listened to Glenn Beck. I think he was responsible for getting some whacky guy off Obama's
team.
I do pray for our leaders, in spite of who they are.