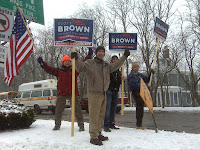 Tomorrow’s the big day in Massachusetts as voters head to the polls to replace Ted Kennedy. It is also a big day for US citizens, as a Republican upset could change the balance of power in Washington, thus affecting everything from health care to the war in Afghanistan.

Even if you don’t like politics, you’ll want to read on.

As an unenrolled voter, there is no onus on me to vote one way or the other. I’m glad. I think both parties have their shortcomings. I champion myself as a free thinker with biblical principals. I do my best to vote for people that support issues which benefit the kingdom of God. On election day I will end up voting for the lesser of two evils simply, because there aren’t any Born Again candidates in this race.

In the final analysis, it comes down to hearing God, and godly wisdom. God is not fickle, nor is He a Republican – but He does have a choice.

I have said it a few times, and it is worth repeating, As Christians, we are to seek first the kingdom of God, not the 1 book of opinions. We are not to be left or right, Republican or Democrat. We are to pray, and participate as the law allows us.

Many think that there is something at stake here – and they are right. But it is not a bunch of pet partisan legislation. Nor is it a battle of ideologies or opinions. It is first about following God. Secondly, it is about understanding the rising tide of End Times evil. Yes, in the end, evil will come to a head in the Valley of Armageddon. The Bible says that the day and the hour are unknown for the return of Jesus- yet we are to discern the season. Other interpretations of Daniel, the Gospels and Revelation seem to point to 12 kingdoms. I suppose they would be something like the European Union. How long will that take? I don’t know. There are other interpretations that point to a cashless society. I suppose as long as crooks like cash that too, will take a little while.

Since 9/11 it seems that wars are no longer one country against another. If you remember, within hours, there were protesters in various places with anti-American placards. But if you looked closely, the same rallies were also against Israel. The feud between Ishmael and Isaac, Abraham’s two sons has been revisited. Ishmael, the illegitimate son of a concubine is the father of Muslims. Isaac, of course is the father of Israel and the Judeo-Christian linage - one religion against another. If you take a few minutes to read over the account of Armageddon, maybe you can see this taking place in the future.

As we head into the future, we can’t, as my friend Daryl said yesterday, “Drive down the road with binoculars.” We need to comprehend the future, while living out the day-to-day, using God’s wisdom and instructions to achieve our personal destiny. We can’t sit around waiting for the last day hoping that we’ll be caught up in the sky with Him - as glorious as that sounds.

What’s at stake in this election? Lives: millions of lives. The lives of our troops, unborn children, the poor, those in prison, the widows, the homeless, and countless other lives affected by the policies and generosity of the United States of America around the world.

For Christians, the key issue that will take center stage tomorrow in the Massachusetts Special Election for Senator is religious freedom in the USA. That’s right. You are probably not going to hear it on the network news – it wasn't even on Fox as far as I know. However; our Attorney General, Martha Coakley, made a statement that was so jarring, I had to listen to it a few times. HERE She said that Catholics that were opposed to abortion should not work in hospitals where abortions must be legally preformed. Say that again? If my religion doesn't allow me to participate in what I morally believe is murder, then I should consider working in another field?

Church, can you see where not voting, not caring and not participating has brought us? And for the record, tomorrow’s election is a dead-heat. This could come down to a few thousand votes; dramatically changing the landscape in the US.

Tomorrow I am going to vote – well if I am still breathing. I am going to go work because my family needs to eat, and hopefully in the midst of that, I will hear His voice and do whatever else is on His mind.
Posted by David-FireAndGrace at 11:28 AM

Your Martha Coakley is a typical socialist democrat following the Humanist ideaology in thier quest for a one world government and one world leadership. It hasnt worked in the past and it will not in the future ( Nazi Germany, USSR, China, Roman empire, and others in history proved that fact.

We just have to pray some voters will realize that and vote those that believe in that ideaology out of our democratic process before it is too late.

We have a congressman here ( Driehaus) in Ohio that thinks Obama, Pelosi, Reid, and Franks are gods and refuses to listen to his constituents. I will not forget that come election time here this year.

This country was built on the fundamental principles of Freedom of faith and the right to worship a God as we see fit. So far those in Washington are fighting hard to take away that right using the rule seperation of church and state in a wrong manner.

It was initially set up not to have a state force or dictate what religion you are to worship with. It meant that you have the freedom to worship as you please. Sadly the demagogs in Washington freely use that rule to mean something else it was not meant to do.

I will now quietly step off my soap box.

Martha Coakley is correct. I am a Catholic Nurse. I do not work in a facility where Abortions are performed. When I worked in a large medical Center in Springfield in the 1980s, when Abortions were still performed in the Hospital settings, a nurse could exempt him/herself from having to work/be floated to this area. A nurse in an ER currently may chose to not take an assignment to care for an individual being given the
morning after pill if this is based on religious/moral reason, and the patient is not abandoned and another nurse is willing to take this assignment.