Everybody Get's to Play - Remix 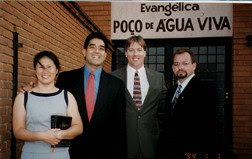 John Wimber, founder of the Vineyard movement, used to say "everyone gets to play." What he meant was that the leadership wasn't going to be doing all the ministry. And that is a good thing because, in most denominations, the pastoral and overseeing authorities were really separated from the laity. They were the paid "holy men," often doing all the praying, all the teaching and all the administration and counseling too. Bigger churches just had more paid holy men to carry out the so called ministry of the church.

When I was doing missions in Brazil, I found it really difficult to just be a regular guy, trying to do what I saw the Father doing. Everyone wanted to address me with some sort of title -- out respect for sure -- but I wasn't ordained at the time. The separation between me and them was perceived. Sure, I studied the Bible in a formal school... but really, who gives a flying epistle? Paul the apostle was a very well educated Jew, but he didn't count his formal education as anything that made him special. Me, all I wanted to be was David... I even insisted on it. 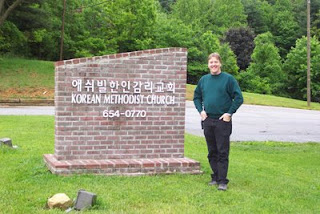 I once ministered in a Korean church. They required that I have an ordination certificate, so I went out and got one from a local congregation that was a plant of a mega church in OK. It's been in a packing box for nine years. I remember ministering in the sanctuary, and my friend Holy Spirit came in a mighty way. For many there, this type of ministry was new, however; the pastor was very savvy. Instead of having another altar call where the manifestations of the Holy Spirit could be misunderstood, he simply sat me in the front pew, and let folks come in one at a time to let me minister to them. Wow! All the paradigms of church went out the window as God healed a woman with a deaf ear, caused demons to flee, and provided insight and wisdom from His Spirit. And the Asian Buffet next to the Waffle House was great too!

I have come across all kinds of religiousness in my day, and sadly, been one of its promoters too.

Another thing that I loved about the Vineyard movement was that they trained everyone to pray for others. My church taught me the laying on of hands, how to pray with someone for salvation and/or the baptism of the Holy Spirit. Sure, I knew how to do some of that, but this was a complete package. It took only four two-hour sessions, and changed the paradigm from "we are the senior holy men" to "you too can partner with Christ for the work of the kingdom." I don't promote any denomination, but the training was freeing for me. Since that time, I have received ministry training from a number of other big name venues... but it all comes down to, be loving, listening for God's leading, be willing to mess up and be accountable, and getting out there and doing it.

What is the impact of this type of Christian life? I find it exciting, amazing, humbling and little scary sometimes.

When I was in Brazil the first time, I went to a Full Gospel church... one where they believed in the gifts of the spirit (1 Cor 12). I traveled with a team (see top photo); one with a healing gift, another a preacher with a doctorate in theology and another a real evangelist. As the worship played, I just prayed in the spirit-- mostly because I didn't understand the words. This particular night my team decided that one of us would preach, and I would do a time of ministry and the laying on of hands.

Something was a little odd about all that was going on there. From the outside, it looked like a standard Pentecostal worship service. But as folks came forward during the ministry time (altar call), there was a lot of speaking in tongues and flopping around on the floor... honestly, this isn't a problem for me, but this night there was something wrong. As I laid hands on people, they began to jump around like pogo sticks, praying in tongues - but they were false tongues. You might be thinking, how do you know the difference if you don't understand tongues? I dunno-- some sort of Holy Spirit insight is all I can say.

After a few of the folks went bouncing off, a young woman came forward and started the pogo stick-ing along with the false tongues. I simply said, as she went up and down while I laid my hand on her forehead, "I break the spirit of religion in the name of Jesus!" In the spirit, I heard a loud snap, just like a breaking bone, and she hit the concrete floor and lay there under the power of the Holy Ghost. After a few moments she began praising God-- and then something stranger happened, she began to speak in tongues; Holy Spirit tongues. It was beautiful, just beautiful. As she did this, tears streamed down her face to the floor. I continued down the line of bouncing congregants.

After a few minutes she got up and began to speak very loudly, and with such authority. The worship team stopped playing, and she gave a short testimony. Through the interpreter, she said. "Brothers and sisters in Christ, I have received this prayer and God has changed me. I know Him now and I didn't know Him like this before. Come, get in line with this pastor (they just can't help themselves :o) ) from the the USA. Don't pray, and don't hop, just receive." That night many religious spirits were broken in the name of Jesus. By the end of the service we had such an amazing turn out that they scheduled a special meeting the next morning for us to minister again.

Formal religion can be tough because there are so many perceived expectations of so called leaders. They must be this and that, gone to school for this and that -- yikes. No wonder we feel separated from them, and worse, less useful to the Kingdom! They have been given the job that is rightfully that of all believers. You don't need to have a degree-- thermometers have degrees and you where some people put those. You just need to have a heart for the Kingdom of God. Jesus said it is at hand-- your hand and His. Jesus said that we could do greater things than He did. SO why aren't we?

Paul Cain, a man I perceive to be a prophet, gave a mighty prophecy about a nameless and faceless generation for workers that would simply be Jesus to a lost and dying world. A generation of sold-out and equipped Christians, that would go out and make a difference for Jesus. I don't know about you, but that's what I am looking for-- a place to just be me, and do His work.
Posted by David-FireAndGrace at 1:19 PM

It's awesome to see that God has used you in soooo many ways and is continuing to use you now!

if it seems to good to be true it's probably religion.